What is a Saint?

A saint is a person just like you and me that God gave special graces to in order for them to do special things. All the saints were holy men and women. Some of the saints could work miracles, some could heal, some had the ability to be in two places at once. God knew these people, as He knows us, and gave them these abilities because God knew these people would do His Will. How often do we pray to do God's Will? The saints asked all the time.

How do we make a Saint?

The process used by the church to name a saint is called canonization. This process has been used since the 10th century.

The bishop waits for a long time after the death of a person. Then an investigation is started. His or her life is looked at and any books or papers that are found are read by the bishop to be sure that person follows the true teaching of the church.

Then a group of people called Theologians and cardinals in a group called 'Congregation for the Causes of Saints' at the Vatican look into it and they decide if they should be approved.

If they are approved then the pope makes them Venerable. The next step is after death they have to perform a miracle. That make sure that the person is in heaven. A person like you or me has to ask them for a special thing such as a healing. If we are healed, then the pope can Beatify them. The third and final step is one more miracle. After that miracle then the pope can canonize them. That tells us that the person has led a holy life, is in heaven, and is to be honoured by the Church.

Do we worship the Saints?

Children in all classes are split into four house groups, named after the following Saints:

House points are awarded for all kinds of good work, helpfulness, special effort and achievement. A cup is awarded weekly to the best house and an annual cup is presented to the overall winner at the end of each year.

Various competitions are held during the year, such as Sports' Days and other challenges, when children work in house teams to earn even more points.

House Captains and Vice-Captains are elected from Year 6 pupils by the children in each house.

Each class has an allocated Saint whose example they try to follow:

We also recognise other important Saints whose lives help us to follow in Jesus' footsteps. 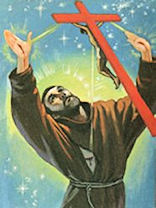 AS a young man, Francis liked to have a good time. His father was rich. But once, when he was sick, Francis heard our Lord calling him to leave the world and follow Him. Francis began to visit the hospitals and to serve the sick. He used to say, "When one serves the poor, he serves Christ Himself."

Francis put on the clothes of a poor shepherd and began to preach to the people about peace with God, peace with one's neighbour, and peace with one's self. He looked on all people and things as his brothers and sisters because they were all created by the same God.

Francis took twelve young men to Rome with him, and the Pope gave him permission to start a new religious order, the Franciscans. He also helped St. Clare to start the order known as the Poor Clares.

Francis had a vision in which he saw Jesus hanging on the Cross. The marks of the five wounds of Jesus were left in his hands, his side, and his feet, which remained with him all his life. When Francis became very ill, he prayed, "0 Lord, I thank You for the pains which I suffer." He died October 4, 1226.

God, You enabled Francis to imitate Christ by his poverty and humility.
Walking in St. Francis' footsteps,
we follow Your Son and be bound to by a joyful love. 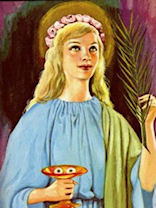 At an early age Lucy offered herself to God. The rich young man who wanted to marry her was so angry at her refusal that he accused her of being a Christian.

The governor ordered a fire to be lighted around her, but Lucy was not harmed. At last, a sword was thrust into her heart. She did not die until a priest came to her with Holy Communion. St. Lucy is invoked by people who have trouble with their eyes.

O Lord, may the intercession of Your Virgin and Martyr St. Lucy,
help us so that as we celebrate her heavenly birthday on earth,
we may contemplate her triumph in heaven. 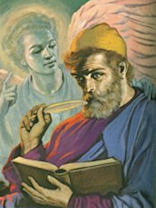 Matthew, called Levi, was the son of Alphaeus. He lived at Capharnaum on Lake Genesareth.

The first Gospel was written by Matthew in which he speaks of his call to be an Apostle. Sitting at his desk one day, he saw Christ come to him. When the Lord said to him, "Follow Me," he at once left his work and followed the Master. The people were surprised to see a Roman tax collector become one of the special friends and disciples of Jesus.

Matthew also tells us of the banquet he gave that Christ attended. It was a public farewell to his former friends. Many publicans and sinners came and sat down with Jesus and His disciples. Jesus said, "I have come not to call the just, but sinners."

Matthew wrote his Gospel to convince the Jews that the Messiah had come. He preached the Gospel among the Hebrews for fifteen years. He is also called the Apostle of Ethiopia. His shrine is at Salerno in Southern Italy.

O God, You chose St. Matthew the Publican to become an Apostle.
By following his example and benefiting by his prayers,
may we always follow and abide by Your will. 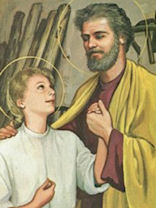 The Heavenly Father chose Joseph a young carpenter of Nazareth to be the foster father of Jesus and the husband of the Blessed Virgin Mary. After they were betrothed an angel appeared to Joseph in a dream and told him that Mary would bear a Child who would be the Son of God.

Mary and Joseph had to travel to Bethlehem to register for the census. They could find no place to stay except in a stable. There Mary brought forth her Son and laid Him in a manger. At the word of an angel Joseph took Jesus and Mary to Egypt and stayed there till the angel told him to go back to Nazareth.

When Jesus was twelve years old he was lost in Jerusalem. For days Mary and Joseph looked for Him with great sorrow and found Him in the Temple.

Almighty God, You entrusted to the faithful care of Joseph
the beginnings of the mysteries of man's salvation.
Through his intercession may Your Church always be faithful in her service
so that Your designs will be fulfilled. 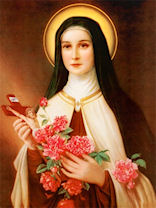 Saint Thérèse of Lisieux (1873-1897) is Doctor of the Catholic church, which means that her life and writings are considered particularly important for Catholics. She is also called the Little Flower of Jesus. She lived in France as a nun, and died at 24 from tuberculosis.

Mother Teresa chose her name in honour of her.

Saint Therese’s message reaches all people at all times. God wants to meet us wherever we are and He is accessible to all who seek Him. The little way is a way of forgiveness, confidence, trust, and love. It is selfless and simple. St. Therese of Lisieux is a great saint who arrived at holiness by a simple path we all can follow. She is with us and will help us.

O Saint Therese the little flower please pick me a rose from the heavenly garden and send it to me as a message of love.
O Little Flower of Jesus, ask God to grant the favours I now place with confidence in your hands (Mention specific requests).
Saint Therese, help me to always believe as you did in God’s great love for me, so that I might imitate your 'Little Way' each day. 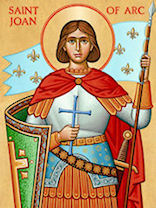 Joan was born in France in 1412. She helped her brothers on the farm and often went to a nearby chapel to pray to Jesus.

When she was seventeen, Joan heard the voice of God calling her to drive the enemies of France from the land. Going to the king, whose army had been defeated, she asked for a small army. The king, believing that God had sent her to save France, gave her a band of brave soldiers.

Joan had a great love for Jesus whom she often received in Holy Communion. She also had a devotion to the angels, especially St. Michael. Joan went before the soldiers carrying her banner with the words 'Jesus, Mary'. The soldiers became filled with courage and drove the British army into retreat. Charles VII was crowned king of France.

Later, Joan fell into the hands of the British and remained in chains for nine months. Then she was taken to the marketplace of Rouen and burned to death. With her eyes on a crucifix, she cried "Jesus, Jesus," through the flames. 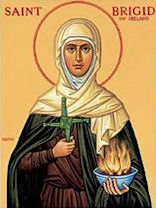 Little is known of her life but from legend, myth, and folklore. According to these, she was born of a noble father and a slave mother and was sold along with her mother to a Druid, whom she later converted to Christianity. On being set free, she returned to her father, who tried to marry her to the king of Ulster. Impressed by her piety, the king removed her from parental control.

At Kildare she founded the first nunnery in Ireland. The community became a double abbey for monks and nuns, with the abbess ranking above the abbot. Her friend St. Conleth became, at Brigid’s beckoning, bishop of her people. She is said to have been active in founding other communities of nuns.

One of the loveliest and most gently profound legends of Brigid is the story of Dara, the blind nun, for the restoration of whose sight Brigid prayed. When the miracle was granted, Dara realized that the clarity of sight blurred God in the eye of the soul, whereupon she asked Brigid to return her to the beauty of darkness. Brigid is also said to have miraculously changed water into beer for a leper colony and provided enough beer for 18 churches from a single barrel; she is sometimes considered to be one of the patron saints of beer.

Brigid, You were a woman of peace.
You brought harmony where there was conflict.
You brought light to the darkness.
You brought hope to the downcast.
May the mantle of your peace cover those who are troubled and anxious,
and may peace be firmly rooted in our hearts and in our world.
Inspire us to act justly and to reverence all God has made.
Brigid, you were a voice for the wounded and the weary.
Strengthen what is weak within us.
Calm us into a quietness that heals and listens.
May we grow each day into greater wholeness in mind, body and spirit.